When I was busy failing high school my friend Dave and I would spend our free time searching out the worst movies we could find. There were several good hunting spots around my home town of American Fork. We cruised the action aisle of the Blockbuster, the bargain bin in the local Fred Meyer and the skin flicks in the Stars video store across from my therapist's office. None of those places could compete with the video wall at the local Circle K.

We used to visit the convenience store late at night and spend a couple hours talking to they guy who worked there. He was in police training. Coincidentally, his roommate owned the Stars video store and the future cop would regale with stories of the video store owner's attempts to get laid. My favorite story was when he brought a woman home and decided that the best way to start a conversation was to pull out a copy of Penthouse Letters and ask her to read him a letter. The circle K worker, Mark, was from the mystical land of Seattle and he would tell us all about the city and tales of the sea. Mark was a fisherman before he decided to move to Utah and become a policeman.

After our nightly conversations we would pull a bad video off of the wall and take it home to watch at 2 AM. We saw classics such as Rock and Roll Nightmare, Hell Comes to Frogtown  and Ninja 3 The Domination. One day we found the true gem, the pure decocted mystical essence of bad movies, the movie that would generate years worth of private jokes and forever engrave itself on my mind. We found Ninja Wars.

Now I'm not going to bore you with the Japanese mythology and film movements and comic books that according to my later online reading gelled together in the twisted mind of Sonny Chiba; then spewed out of his mouth like vomit from a devil monk: 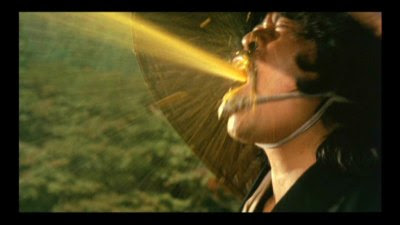 Nay! I will just say go, see it now! It has everything a bad movie should have. A mysterious magician, an 80s action soundtrack, devil monks who spit vomit out at our heroes to encase them in yellow plastic! And did I say ninjas? It has ninjas, scores and scores of ninjas.

Not convinced? Here's the score. The evil lord of one of the provinces of Japan, Danjo, thinks he's good enough to be king. Kashin Koji comes to town in a storm and gives him a prophecy, whoever wins the heart of Ukio Dayo, the wife of the top samurai will become the ruler of Japan. Kashin gives Danjo the services of five devil monks, the plan is to capture her, make her drink a love potion and fall in love with Danjo. First though, they need a virgin who can supply the tears needed to make the love potion. Where can they most easily find a virgin? In the forest among the ninja clan of course! The devil monks go to the forest and capture said ninja, but not without a fight from the man who loves her, Jotaro. They take the ninja girl back to Danjo's place but the wily ninja girl cuts off her own head with one of her ninja tricks! Well no matter, the devil monks can just put it on the head of a girl who's hanging at Danjo's house and we're good to go, we only need the body of a virgin, not the head.

So Danjo gets his love potion and goes to try to get Ukio to drink it. While attending the huge Buddhist ceremony that Ukio and her husband are at, ninjas attack the place and start the temple on fire. Jotaro rescues Ukio and hides with her inside the giant Buddha statue until the devil monks catch on. Then it's on for a battle between Jotaro and the monks. Jotaro gains the upper hand and Ukio falls in love with him. In the burning wreckage of the temple, Ukio appears on a burning cross and Jotaro jumps onto the cross with her and kisses her. They then appear to perish in the flames. Kashin Koji then reappears to repeat the prophesy and then laughs quite a bit.

There's so much I've left out like spider teapots, boomerang swords, geysers of blood spurting out of severed necks and one of the most fearsome sex scenes in movie history. Luckily you don't need to hang out at the Circle K to enjoy this spectacle, you can enjoy it right in your chair because nobody cares enough about its copyright to have it pulled off of You Tube.


Do yourself a favor, get some popcorn and check it out. Thanks for reading again and tell me about a bad movie I might have missed in the comments.

Posted by Wildpokerman at 8:58 PM